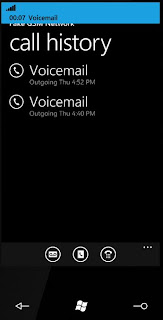 The new Windows Phone Developer Tools pack that was released a few days ago have been unlocked again by RustyGrom over at xda developers.

Aparently there are some newly implemented call functionality that wasn’t in the build the last time. The Office implementation is also partly in place.

If you want to play around with the build yourself, jus thead over to xda developers.

If you just would like to see the new phone hub in action you can check out a video that the guys over at Engadget made.