The smartphone market is growing in leaps and bounds, and Intel wants a bit of the cookie. Today they launched the next generation smartphone and netbook platform. The processor series is an improved Atom named Atom Z6xx, previously going under the work name “Lincroft”.

The smartphone processor version is called Atom Z600 and is a single core processor clocked at 1.5GHz. The new smartphone platform boasts the following specs:

The platform is currently supporting a few of the Linux based mobile OS’es, namely MeeGo, Android and Moblin. 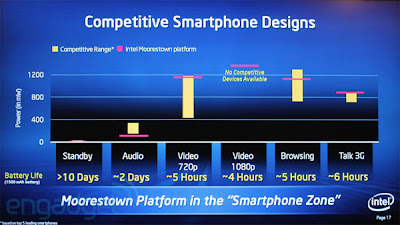 Here we can see that while Intel indeed has improved a lot compared to the previous generation, the competition has improved as well. Leaving the new platform already wanting. It’s not hard to imagine that with a slightly deprecated battery we can see that the platform will perform like most platforms available today, or in some cases worse.

Performance wise it looks good though, and the guys over at Pocket-lint managed to get a glimpse of a Quake 3 test run on the platform, it was playing at around 100fps which is indeed impressive. Have a look at the video below.

This is speed that will beat the current master of the throne, the Qualcomm Snapdragon running at 1GHz. But Qualcomm got more coming for us now in 2010 supposedly, so comparison is pretty useless until we can compare against their next generation.

As for those awaiting Windows Phone 7, there is no mention of support of that platform from Intel. Engadget contacted Intel and asked about their plans for WP7, this is what they were told:

Intel’s goal is to ensure we offer our customers a choice of software that runs best on our processors. Yesterday’s announcement was focused on Linux OSs, however our strategy is to also support a full Windows experience on Atom as we do with Menlow, Intel’s first generation atom chip for mobile devices and Pinetrail, Intel’s chip family for netbooks. Stay tuned.

This can be interpreted in multiple ways as always, but since they do not mention Windows Phone 7 at all, rather talking about “Windows experience” it is possible that the netbook platform will be aiming to support Windows 7 as the last Atom platform did, and not aim for the Windows Phone 7 market.

But with the seemingly limited energy efficiency I think I would preferably go with another platform for my first WP7 device, as it’d be nice to not have to charge the phone multiple times during a work day.

For some more slides form the press conference you can check out Engadget’s gallery here.

Intel’s own fact sheet can be gotten here.