Wednesday the 9:th of June, I attended the Windows Phone 7 Developer Hub in Stockholm. Holding the technical presentations were Ben Riga and Niel Hutson and during the evening was a design centric lecture held by Albert Shum and Bryan Agnetta.

Overall the event was very good I felt. There was quite a lot of info I got that I never had heard about before, we also got some hands on with devices they had brought, and I also got a few of my questions answered.

The devices they had brought with them was the LG “Panther” and the Asus phone we’ve seen so many times by now. I didn’t know it before, but the Asus phone actually got a name, it’s called “Galaxy”. 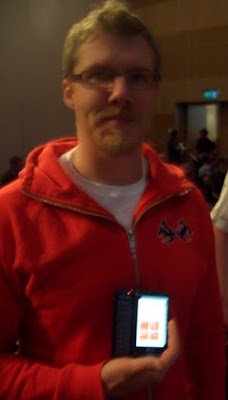 I got some hands on time with the Panther and these are some of my thoughts:

I didn’t get any hands on time with the Asus Galaxy device, but I got confirmed that it was just a very early prototype, just as suspected from it being shown as the first device in Barcelona at MWC 2010. They said Asus has more devices in line, and they look nothing like the Galaxy.

More posts with information from the event to follow tomorrow…