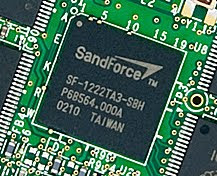 Rumor has it that Sandforce is pushing their next version chip release forward one quarter to Q3 this year.

The Sandforce controller has been the all the rave this year for SSD controllers. They have been improving performance in leaps compared to the old Indilinx controllers. With the use of the Sandforce 1200 and 1500 series a lot of SSD manufacturers have been producing better and better SSD units this year. So the expectations for the next revision is naturally set high.

If the rumors now hold true, then the next version Sandforce controller won’t let any one down, as they are claimed to support the new sata 6Gbps interface and reach performance of up to 520MB/s for both reads and writes. This means that they are almost maxing out the new sata 6 interface with the first incarnation of the new controllers.

As there is only one other SSD sata 6Gbps drive in action now, the Crucial RealSSD C300, we might finally get some price competition in that segment as well. Hopefully the sata 3Gbps SSD’s will become cheaper too, as a result of not being king of the hill anymore.

Sandforce rumored to out next revision in Q3
Tagged on: SSD