The Droid X was announced today to be provided by Verizon for $199 on a 2-year plan and will be available on July 15:th.

The specs looks pretty much as what was believed from the leaks before, the full list of impressive specs reads:

Verizon stated that Droid X users will get access to Froyo(Android 2.2) later this summer, and this will also bring full Flash 10.1 support.

On paper the Droid X looks like a very strong candidate for the top spot as king of Androids. The current competition being HTC’s EVO 4G and Google’s Nexus One. It will be fun to see a couple of reviews when the unit becomes more available to see what it handles like.

In the mean time, AndroidCentral have made a very nice comparison sheet over the iPhone 4, HTC’s Droid Incredible, HTC’s Evo 4G and Google’s Nexus One. Check it out below. 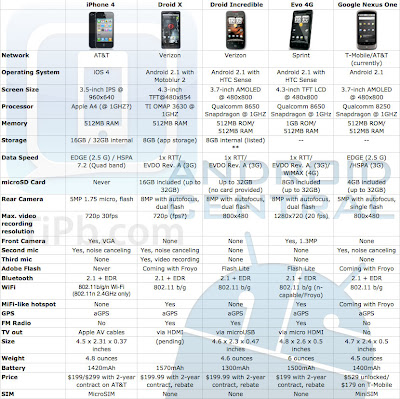