I have been moaning a good while that my old laptop is unusable, and talking of buying a new one. Yesterday I finally made good of my promise to myself.

My old laptop was from the early 2000’s. I decided to reinstall it a few months ago and put Windows 7 on it. I also got a USB memory and used it for Ready Boost(I’ve written about it in a very early post in this blog). But in the end it just had to little memory to be usable for anything more than one program at a time. (And if I didn’t want to multitask I could just get an iPad, right?)

Deciding for a model

After thinking a lot about what to get, going from the low budget across the spectrum to the high end gaming laptops. I finally concluded that what I wanted was a rig with 4GB memory at the very least, a decent processor and an SSD drive for rapid application loading and also to help with battery life.

As I want the laptop to code on I figured I didn’t need any real graphics power, and the processor I felt would be good to have at least a dual core to if I need to test any multi threaded applications. So even though it would been nice with an core i7 processor, it felt like overkill.

Eventually I ended up getting an Acer Aspire 5739G. With a dual core 2.2GHz processor, the power felt acceptable, and it has 4GB memory as I wanted. The battery life was stated to be around 2 hours, which I felt was a bit weak. So the aim was to extend on those two hours. The machine itself was refurbished, and hence cost less than 75% of the listed price!

How to extend the laptop battery life 100% 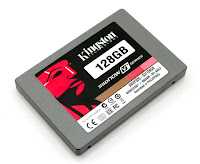 Before I even booted it I swapped discs in it, and replaced the drive with a Kingston SSD Now V+ 128GB drive. I gave a it a fresh Windows 7 install without all the crapware regularly being installed on laptops by manufacturers. And after a session of finding out some undervolting limits, I now have an expected battery life (at low processor usage) of over four hours!

I was a bit surprised that it wasn’t faster when I was installing Windows and my developer tools. But I’m surprised at how fast it is to boot the OS and to load all applications! I must say I’m very happy with the performance, and I think it’s about time to get an SSD drive for my gaming rig as well.

So now that I got my machine sorted, I no longer have an excuse for working on my Windows Phone 7 app, hopefully it will be done by release time 🙂