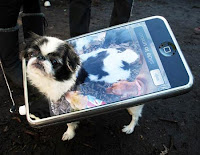 In an official letter Apple announced that the antenna issues are an illusion. The illusion is courtesy of faulty software and a erroneous formula used to calculate reception strength.

The sudden drop pf 4-5 bars that some people experience when holding the phone over the small band in the left lower corner, is only due to them not having good coverage to begin with. They do admit that there is a small loss of reception when holding the phone, but that the people that see those sharp drops already has a bad reception.

In reality the reception should only show a bar or two, and the drop should be a bar or so, but the faulty formula makes the phone show 5 bars instead of 2.

2 thoughts on “iPhone 4 – Antenna problem is a software problem?”